12 Dec 2019 in eCommerce, How to Sell Online, Product Photography by Mahmoud Alshafiey

In the simplest terms, 3D printing is creating a 3D model out of a 2D representation almost out of thin air; it’s the futuristic dream that many sci-fi fans have been waiting for years. The history of 3D printing is quite recent relatively.

It all began when a Japanese inventor decided to use ultraviolet light to solidify certain polymers to make them gain a solid texture. This later led to the invention of stereolithography which was the main stepping stone to the 3D printing industry we see today.

It was intended to create lower scale models of objects before they’re manufactured since it wouldn’t cost much to create a miniature version. The rise of the computers and its manufactured designs paved the way to compose more intricate and complex designs to be 3D printed. 3D printing has seen a few developments over the years but the latest and most popular one is the Fused Deposition Modeling.

It’s relatively effortless and doesn’t cost much which makes it the most commonly used technique to print 3D models. A machine heats thermoplastic then expels it in a highly-precise manner into thin layers after another. Using 3D printing for prototyping and testing before the launch of products is known to be one of the most cost-efficient and fastest methods of launching products. 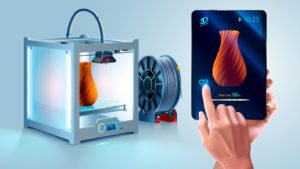 Many often use the two terms rapid prototyping and 3D printing interchangeably, and while they’re similar in some aspects, they are different in others. They both use STL data, a file format used in stereolithography applications, to build layer upon layer of the model. Additive manufacturing is the accurate term to use when 3D printing is used on an industrial scale, while commercial and consumer uses are just referred to as 3D printing.

Rapid prototyping is more of an application of 3D printing or additive manufacturing that creates a 3D model in a relatively short time using CAD software. It’s used to manufacture a part or even a complete product with all its specifics. Rapid prototyping has a bigger range of materials that can be used and is much more complex which makes it more expensive than commercial 3D printing.

Best Time to Use 3D Printing

3D printing isn’t only used for big-scale projects thanks to the innovation and research that was poured into its development over the years. 3D printing projects should always be planned on a case-by-case basis but the best way is to start it as early as possible in the product development stage.

3D printing technology is used to create or manufacture parts that are too small to be machined, especially if they are less than 1000 parts. It’s also used to further develop products, create unique items like prosthetics, extremely complex products with hard geometry to be machined, and organic shapes.

Prototypes were always used as an accurate and precise method to test or strain products. It’s still being used for these purposes but 3D printing has revolutionized the prototyping process and industry.

The past reliance on digital models was replaced with 3D modeling for almost all manufacturing stages. The products are made with the same capabilities of the original with a certain scale that made it possible to replicate the same results with a bigger design using the same exact materials. 3D printing can even go beyond prototyping to the manufacturing of products from A-to-Z.

A lot of businesses are emerging with great rapid prototyping and tooling services to accommodate the boom that 3D printing has caused across numerous industries.

Manufacturers have taken a technology so customizable like 3D printing and it made accessible with all its glory to startups and entrepreneurs by producing work with great quality, increasing manufacturing and prototyping processes done by 3D printing exponentially.

While 3D printing entails using technology to reach the creation of a 3D model, it doesn’t mean that they use the same method. Here are the most common methods used by different printers for prototyping and manufacturing:

3D printing is on its way to becoming a standard in countless industries thanks to the lower costs that were made available by 3D printing technology pioneers. A lot of people are buying 3D printers to create convenient objects that can be used to support or augment home appliances.

While the consumer version of 3D printing is different from an industrial one, it’s still making strides when it comes to mass-production as well. The cost of 3D printers is definitely cheaper but it’s still expensive and not obtainable by everyone. Most businesses that decide to use 3D printers on a big scale resort to service providers to create their designs and models.

While it’s still not recommended to use 3D printing to create tens of thousands of the same product, it’s still your best bet if you’d like to prototype, test, and even launch a product in the shortest time possible.